In addition to being the most unique and evasive in application, Push Hands is more than just self defense. It is a way develop sense about others intentions and use of force. Just as T\\'ai Chi is considered a high level form of Chi Kung for health enhancement, Push Hands may also be utilized as an in-depth method of encouraging self-healing. To practice push hands effectively requires a great amount of sensitivity, relaxation, and precision. I remember the thrill I had when I first contacted chi in solo forms practice. The feeling was one hundred times more rich when I contacted my chi, another persons chi, and "our" chi when practicing Push Hands.

At times, I have observed some students of the internal arts engaged in solo forms (or, Standing Meditation) practice either alone or in large groups and avoiding (as well as devaluing) the practice of push hands. They seem to feel that their practice is exclusive and high level. While in some cases that may be true, the many benefits by engaging in the touch of another and the manifestation of practice in close proximity with another practitioner offers far more reaching benefits.

So, if you regularly practice forms and not pushing hands, I encourage you to give it a go, and develop sensitivity to the touch that only Push Hands can deliver. It doesn't matter the style, Push Hands will improve, change, and bring a sense of wonder, reality, and joy to your internal arts practice. Additionally, your solo forms practice will experience positive changes as well.

Probably the most influential Push Hands teacher I have had the honor to train with was the late Ma Yueh Liang. son-in-law of Wu Chian Chuan, whose father developed Wu style. Ma was a legend who was recognized as one of the top 100 practitioners of the martial arts in all of China during his life, and was featured both in the documentary series and book, Healing and the Mind, by Bill Moyers. In the book, unfortunately not in the series, Ma does discuss the art of push hands. Ma was so soft, so sensitive, and yet so powerful and keen. I not only had the great honor of training with him, but I am the last student of his to see him alive before his passing at age 98 at Xu Wei Hospital in Shanghai on March 13, 1998. 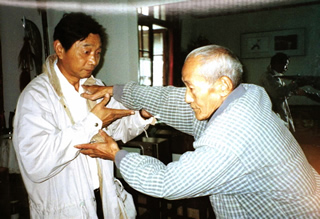 According to Ma, and based in the T\'ai Classics, there are 13 principles of power utilized in Push Hands practice and T\\'ai Chi application. These principles are called "Ba Men, Wu Bu" (or Eight Doors, Five Steps) and were passed to Wu Quan You, Ma\\'s grand-teacher and father of his father-in-law, Wu Chian Chuan, having originated from Yang Luchan, creator of Yang Style T\'ai Chi, and one of his sons, Yang Banhou, an exponent of the small frame. The principles can be applied or joined together in a variety of ways, and are essentially methods of harnessing and issuing energetics.

The first principle is known as Peng. Peng by many accounts in the English language is defined as "ward off." However, according to Ma, Peng also means to "test" or "evaluate." This means when an opponent is doing something to you, you need to intercept or neutralize their attacks, and test or evaluate it. Actualizing or determining where the source of their power is, their lead-in technique, or where their center of gravity is located.

The second is known as Lu. Known by many English language accounts as "Roll Back," or "Stroke," Ma felt Lu meant "to follow." Following is an unassuming objective according to Ma, and one which yields to overcome. If you follow your opponent closely enough, soon the opponent will run out of their position trying to catch you. According to Ma, confronting or fighting with the opponent is the wrong thing to do. Follow and overcome, and send the force or opposition out.

3. JI (Press / Pressing Through a Limb to Penetrate an Opponent\\'s Spine)

Third, Ji. Ji by some accounts refers to pressing, but Ma taught that it was a pressing through your limb or the limb of an opponent, and going through and penetrating the opponent\\'s center.

The fourth is known as An. An translated means push down. However, for Ma pushing was not only a head on affair. The power of pushing is greatly amplified when pushing is done on specifically slight or wide angles with light, yet precise hands.

Furthermore, pushing can be more useful when the position of the joint you are pushing is considered, and which way the opponent's joint is trapped or reacts as you penetrate with the push effects how much force or pressure is applied.

Peng, Lu, Ji, and An are considered to be the foundation by which the other hand methods are based. In Yang Style, they are practiced during Grasping the Bird's Tail. However, while they are subtly present in Wu\'s Grasping of the Bird\'s Tail, they are practiced formally in Wu\'s Basic Manipulation of the Pushing Hands Methods. The introduction of this method is done solo, and practiced as Peng, Lu, An, and Ji, but when joined with another practitioner, the two make Peng, Lu, Ji, and An together.