Overview of Hsing I Ch'uan (Xingyiquan)

An Overview of Hsing I Chuan (Xingyiquan) - page 1

Animated picture: Xingyiquan Dragon Application (Take Down) Jiang Rong Qiao system. More applications appear as links later in this page and in other pages on the chiflow.com website.

(Xingyiquan and Hsing I Ch'uan are different English translation schemes for the same "Form and Will Fist" martial art.) Also see:

The Development of Hsing I Ch'uan (Xingyiquan) 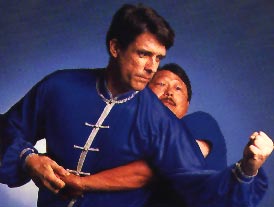 Hsing-I was developed by Ji Long Feng who was a martial artist known for his ability with a spear who lived near the end of the Ming dynasty and the beginning of the Qing dynasty. His love of the spear was so great that he set about to develop a system that would incorporate the theories of spear tactics in hand to hand practice.

During his quest, he met a hermit monk living in seclusion on Zhong Nan mountain who taught Ji Long Feng a martial art known as Yueh Fei Chuan Pu. A martial art believed to be created or popularized by the folk hero Yueh Fei, a general in the Emperor's army during the Song dynasty. 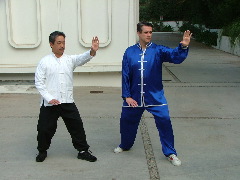 Yueh Fei was a hero who honorably served the emperor. However, a treacherous court official named Ching Gui, spoke to the Emperor terribly about Yueh Fei. Trumping up fabricated charges of treason, Yueh Fei and his entire family were executed by Imperial order. To this day people are said to spit on Ching Gui's grave, while paying tribute and honor at Yueh Fei's.

After a great deal of arduous training and deep contemplation, Ji Long Feng suddenly saw an important concept in a clear light. He discovered how to naturally connect his internal power (Nei Kung) with the outer shape of his body (Wai Hsing).